Multiple sclerosis, or MS, is a disease in which the body’s immune system attacks the brain and spinal cord, disrupting a vital communications network. In the worst cases, it can bring partial or complete paralysis.

There’s no cure yet for MS, but advances are moving forward in slowing progress of the most aggressive form of the disease, and research findings continue to offer hope to patients. Just last month, researchers sponsored by the National Institutes of Health released the results of a study finding that people infected with Epstein-Barr virus (EBV) were 32 times as likely to develop MS as uninfected people. 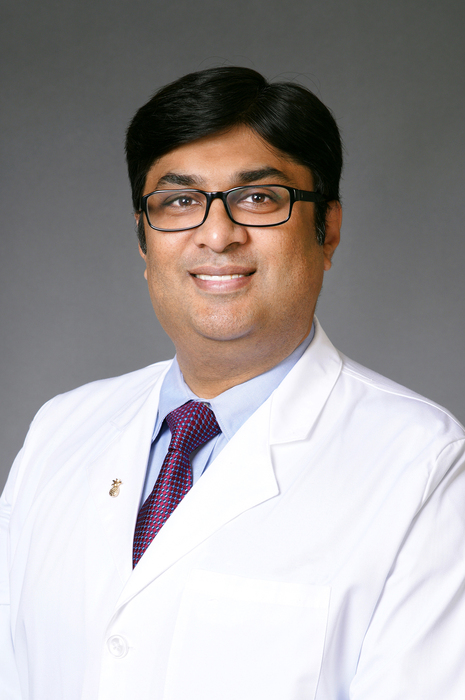 Epstein-Barr virus, or EBV, is one of the most common human viruses in the world. EBV can cause infectious mononucleosis, also called mono, and other illnesses. The EBV-MS connection is important, explains Fawad Yousuf, M.D., a neurologist with Marcus Neuroscience Institute, part of Baptist Health.

“MS in not curable, but there’s a light at the end of the tunnel,” said Dr. Yousuf. “There is hope. For example, the study that indicates the high correlation between EBV and multiple sclerosis patients. And if we can come up with a vaccine for EBV, maybe we can decrease MS cases. Maybe we can help more patients.”

Already multiple disease modifying therapies are in clinical trials which can help with the remyelination process, the process that restores the myelin sheaths protecting the nerves of the central nervous system.

Further developments are enabling the earlier diagnosis of MS with the use of newer, more powerful neuro-imaging techniques which can detect metabolic indications of MS in the brain’s white and gray matter. These biomarkers go undetected by standard imaging protocols. Starting treatment with immunotherapy drugs earlier may have significant benefits for people with MS. MS is the most common disabling neurological disease of young adults, with onset of symptoms occurring between the ages of 20 to 40 years.

Investigators also are using MRIs to study the natural history of MS and to help define the mechanism of action and cause of side effects of disease modifying therapies, according to the National Institutes of Health, which is sponsoring studies related to MS.

Once diagnosed, MS patients have more medical treatments available than ever, said Dr. Yousuf. Just five years ago, the FDA approved a drug, Ocrevus which is given by intravenous infusion to treat patients with primary progressive multiple sclerosis (PPMS), the most aggressive type. This was the first drug approved by the FDA for PPMS.

“There are more than 20 MS-modifying therapies that have been approved by the FDA (U.S. Food and Drug Administration. They include injectables, oral pills, infusions. And they depend on the wellbeing of patients and what they need. We offer them choices That is something that is very important in holding or slowing the disease process.”

What Exactly Is MS?

Dr. Yousuf specializes in the management and treatment of MS. “The resulting inflammation causes lesions that disrupt the signals of those nerves to the brain. It’s like a sports car driving on an unpaved road – the signals get slowed down and bounced around.”

The risk factors for MS, Dr. Yousuf says, include being female, as MS is three to four times more prevalent among women than men. Age is also a factor, as most people are diagnosed between 20 and 50 years old, according to the National Multiple Sclerosis Society.

Additionally, Dr. Yousuf notes that people of Northern European descent and those who live farther from the equator tend to have higher rates of MS, which, he says, has been linked to reduced levels of vitamin D. Smoking and adolescent obesity have also been linked to the development of MS.

Many viruses and bacteria — including measles, human herpes virus-6, Epstein-Barr virus (EBV), and Chlamydia pneumonia — have been or are being researched to determine if they are linked to the development of MS, according to the National Multiple Sclerosis Society.

Symptoms can vary greatly, which can lead to difficulties diagnosing MS, Dr. Yousuf says, as they mimic other diseases and conditions. Most commonly, people with MS experience:

Because there is no clearly known biomarker for MS and because the symptoms are nonspecific, Dr. Yousuf follows the 2017 McDonald Criteria when he suspects MS. He relies on a medical history of symptoms; detailed neurological examination; MRI imaging of the brain and spinal cord to uncover the presence of lesions, where they occur and how recently they occurred; and cerebral-spinal fluid testing to detect certain elevated proteins.

Dr. Yousuf says that most cases of multiple sclerosis can be classified by three main types:

Treatment of MS depends on the type of MS and whether there’s an active, or acute, flare up of symptoms, Dr. Yousuf says. For those acute phases of the disease, steroids and plasma exchange can provide relief. For long-term maintenance and improve quality of life, he says there are more than 20 medical therapies available to help reduce symptoms, and slow the progression of the disease to ward off neurologic, cognitive and physical disability.

Marcus Neuroscience Institute offers a comprehensive program to diagnose and treat MS. An infusion center provides patients with intravenous medications to reduce symptoms and slow the progression. The Institute also offers an MS support group and rehabilitation services to manage the physical symptoms that can occur with the disease.