Because it is elusive and can go undetected until it has spread elsewhere in the body, pancreatic cancer is particularly deadly, with a mortality rate of roughly 80 percent. It is the fourth leading cause of cancer deaths among both men and women in the U.S., according to the American Cancer Society, and patients diagnosed with inoperable pancreatic cancer have especially poor prognoses, experts say. A recent study at Miami Cancer Institute, however, showed that an advanced type of radiation therapy may significantly prolong overall survival for such patients.

Typically given after chemotherapy, MR-guided SABR is an outpatient, painless and non-invasive procedure that is usually completed with little to no patient side effects, Dr. Chuong says. 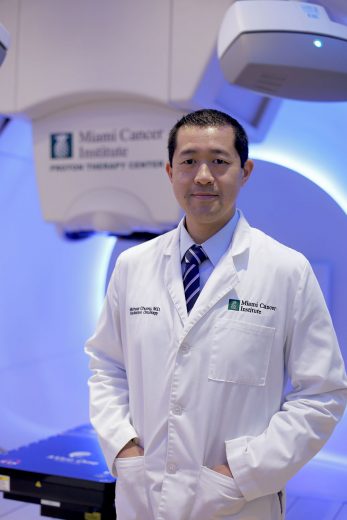 “Real-time MRI scans permit continuous tracking of the pancreas tumor during treatment and enable us to deliver with pinpoint accuracy an unprecedented high dose of radiation over just five days,” he explains. “This advanced imaging also allows for treatment modification to account for changes in the patient’s internal anatomy from day to day, thus achieving treatment personalization and further improving accuracy and safety.”

In 2018, Miami Cancer Institute became the second institution in the country to offer MR-guided SABR on the MRIdian Linac and has since been recognized as a global pioneer in the development of this novel technology.

“We were among the first to publish MR-guided SABR results for inoperable pancreas cancer in 2019 that demonstrated encouraging early results,” Dr. Chuong says. “Now, with longer follow-up, we’re encouraged to see that the benefits of MR-guided SABR not only have been maintained over several years, but that they’ve also been achieved without significant side effects in nearly every one of the patients we studied.”

Dr. Chuong notes that the median survival time for inoperable pancreatic patients receiving chemotherapy and standard radiation therapy is only about 12 to 15 months. In the study from Miami Cancer Institute, patients treated with MR-guided SABR had a significantly longer median survival – 21 months – and some patients were still alive several years later with excellent quality of life.

“These exciting results provide additional support for ongoing and future clinical trials of MR-guided SABR for inoperable pancreas cancer, several of which are being developed at Miami Cancer Institute and will be opened at other institutions in the United States,” Dr. Chuong says.

More than 60,000 people in the U.S. will be diagnosed with pancreatic cancer this year, according to the American Cancer Society. While the death rate for some cancers has dropped significantly in the last decade, it has not improved in a meaningful way for pancreas cancer. With symptoms that mimic other ailments, it often goes undetected until it is in an advanced stage.

Also, because pancreatic cancer routinely involves important blood vessels in the abdomen, it can be difficult to remove surgically, Dr. Chuong notes. As a result, both chemotherapy and radiation therapy play an essential role in the management of such patients – some of whom may eventually become candidates for surgery.

Dr. Chuong hopes that, as more trials are conducted, targeted therapies such as MR-guided SABR will also benefit patients with many other types of cancer. “We understand how devastating a diagnosis of pancreatic cancer can be for patients and their families,” he says. For people with inoperable cancer, he adds, every day is a gift. “We’re excited that our work appears to be helping extend survival times and quality of life for our patients, and advancing cancer care overall."