The most recent phase of surface replacement of the hip, driven by advancements in biomaterial and design, began more than a decade ago with a renewed interest among orthopedic surgeons. But it has become apparent that selecting the best patient candidates is crucial, and that hip resurfacing procedures require adequate training and experience to achieve favorable outcomes.

Despite advances, there have been mixed results over the past 40 years when it comes to surgical procedures and biomaterials associated with hip resurfacing, explains Charles Lawrie, M.D., a board-certified, fellowship-trained orthopedic surgeon at Baptist Health’s Miami Orthopedics & Sports Medicine Institute.

But hip resurfacing is going through a slow revitalization as more orthopedic surgeons proceed through certifications and training at sites where mentors can monitor and assist.  “The procedure requires a more extensive surgical approach and has been associated with a learning curve of 25 to 75 procedures,” researchers stated in a recently published: Results of the First U.S. FDA-Approved Hip Resurfacing Device at 10-Year Follow-up.

The Birmingham Hip Resurfacing (BHR) metal-on-metal system was the first such system approved by the U.S. Food and Drug Administration. In the latest issue of JBJS, findings of a 10-year study that followed the FDA approval in 2006 were published. Researchers focused on a cohort of 280 hips (253 patients) undergoing primary BHR procedures at five sites. The mean patient age at the time of surgery was 51 years; while 74 percent of the BHRs were implanted in male patients. Moreover, 95 percent of the hips had a diagnosis of osteoarthritis.

The results were somewhat encouraging, but there are caveats. Primarily, the surgeons who performed the procedures on the cohorts were mostly experienced. The results also reiterate the importance of selecting the proper patient candidates, with younger male patients being the best candidates. 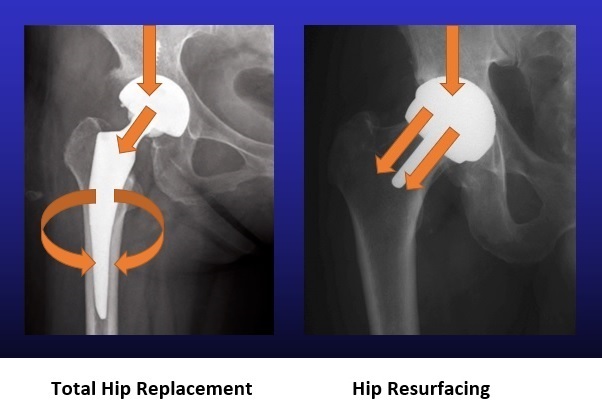 Using all-cause component revision as an end point, the 10-year survivorship for all hips was 93 percent.  Male patients who were younger than 65 years of age at the time of the surgical procedure had a survivorship of 96 percent. Survivorship among male patients was significantly better than that among female patients. The study's authors concluded "that the BHR implant system is safe and effective through 10 years of follow-up, particularly among young male patients."

"Metal-on-metal got a very bad rap at one point back in the 2010, 2011 and 2012," said Dr. Lawrie. "Many of the hip resurfacing performed, did not achieve good patient outcomes because of a surgeon error. Some of the smaller-size of the implants were taken off the market, because bigger sizes actually have less risk of metal problems. But, essentially, the registry level data and research data on this showed that when these are done well, hip resurfacing implants survive just as long and do just as well as hip replacements, in terms of longevity, risk and complications."

Hip resurfacing is an alternative to traditional total hip replacement, especially for younger, male and very physically active males. The Birmingham Hip Resurfacing (BHR) system is a two-part system. A metal cap is placed over the resurfaced femoral ball. A metal cup fits into the pelvic socket or acetabulum. So, essentially the BHR is a metal-on-metal joint. The BHR system is designed to conserve more bone than a traditional hip replacement. By conserving more bone, these younger patients maintain the option of future surgeries, including a traditional hip replacement, if necessary later in their lives.

A metal-on-metal joint, such as the BHR, reduces complications caused by polyethylene wear in traditional hip replacements. which have a plastic liner in the acetabular component. Polyethylene wear is considered a factor in the loosening of hip prostheses.

Dr. Lawrie is one of the leading orthopedic surgeons in the country that is fully certified and trained to perform hip resurfacing, which is intended for certain patient candidates. Additionally, he is involved in designing and developing technology and implants for hip and knee replacement to improve patient outcomes.

"The patients that are appropriate for the surgeries are very high-activity people," said Dr. Lawrie. "These include mostly guys in their 40s, 50s, and early 60s who are still going out and playing competitive soccer, or power-lifting or taking part in triathlons and 'iron man' competitions. Women who are of bigger statures, and are past their child-bearing years. That's because there are concerns that the metal shells can affect the placenta."

When is hip resurfacing a good option for these active patients?  Essentially, the hip resurfacing's "metal-on-metal" structure lasts longer and are better designed for active people, compared to total hip replacements which are ideal for older patients, said Dr. Lawrie.

"No. 1 is the bearing of metal-on-metal, instead of ceramic-on-plastic or ceramic-on-ceramic, as is the case with hip replacement," explains Dr. Lawrie. "As long as it's done well, the metal-on-metal should last forever. So, it's works well in a young patient. The metal on metal also cannot break. And the bone density around the implant actually gets stronger over time."