Dr. Dienst’s choice put him in the right hands when his health began to deteriorate. After he developed a thoracoabdominal aortic aneurysm, a very complex and dangerous condition also known as a TAAA, he underwent an investigational procedure with Dr. Lee that is offered in only 10 medical centers in the United States.

One of the earliest patients to have this surgery, Dr. Dienst regained his health and was able to quickly go back to work as an intensive care physician at a community hospital in Titusville, on Florida’s Space Coast. He says he knows things could have turned out very differently.

“I’ve been in medicine for 45 years. I’ve seen the worst. I’ve seen patients who have what I had,” Dr. Dienst says. “Most of them don’t survive.”

Dr. Dienst’s decision to seek care with Dr. Lee was no coincidence. Other respected physicians had recommended he see Dr. Lee because of his surgical skill and relentless pursuit of innovative solutions, particularly when it comes to aortic problems. Dr. Dienst tracked down Dr. Lee at Boca Regional’s Lynn Heart & Vascular Institute, part of Baptist Health, and began to see him regularly, even though he had to travel to get there.

“He was, without question, the most experienced and talented vascular surgeon in Florida and probably in the South,” Dr. Dienst says. 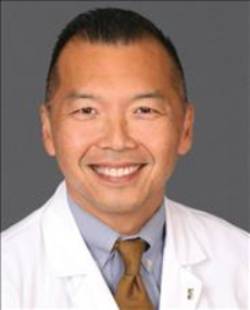 Dr. Dienst knew his health was still delicate even though he had survived the aortic dissections, a life-threatening condition in which a tear occurs in the inner layer of the body’s main artery. About 85 percent of the people who experience that kind of medical emergency do not survive, he says. In fact, during his second aortic dissection, which occurred while he was at a medical conference in San Francisco, he suffered a cardiac arrest and nearly died but was brought back through quick medical intervention.

During follow-up care in Florida, Dr. Lee detected that Dr. Dienst now had a thoracoabdominal aortic aneurysm, a bulging in the aorta that extends from the chest to the abdomen. Because aneurysms weaken the artery, they can rupture, leading to internal bleeding and death.

What differentiates a TAAA from other aneurysms is that it extends upward into the chest as well as downward into the abdomen. These are among the most difficult aortic aneurysms to treat due to the complexity of their location.

During surgery, Dr. Lee says, “All of these blood vessels have to be individually managed and blood flow maintained in order for the vital organs attached to those blood vessels to remain alive.” Traditionally, TAAA aneurysms are repaired with an open surgery that requires a two-foot-long incision that starts at the top of the chest, wraps across the abdomen and extends diagonally all the way to the pelvis.

“It is probably the biggest surgery the human body can endure,” Dr. Lee says, adding that the procedure is very high-risk and requires a long recuperation.

Although open surgery can be the right choice for certain procedures, Dr. Lee notes that his minimally invasive endovascular approach to TAAA, using a device for which he is the principal investigator, is far less traumatic. That’s the procedure he performed on Dr. Dienst.

The device is a personalized stent that has special sleeves (“branches”) and hole (“fenestrations”) to accommodate each patient’s individual anatomy, protecting the blood supply to all parts of the body. The anatomy of a person’s aorta is like a fingerprint —each is unique to the individual, and these differences are important to the proper treatment of the aneurysm, Dr. Lee explains. In a structure as delicate and complex as an aorta, those differences can’t be dismissed.

“I take your CT scan and like an architect, I design a custom-made, special stent uniquely fitted to your anatomy,” Dr. Lee explains. “It’s like a custom-tailored suit for your particular body. It will fit your aorta perfectly.”

The stent is deployed by a catheter that is threaded through the body from two small needle punctures in the groin, eliminating the need for an incision. Once in place, it provides a route for the blood to flow without pooling in the aneurysm’s bulge, where it would create pressure.

The device has been used in approximately 150 patients in the past 10 years, Dr. Lee says. “There is no equivalent device available at the present time,” Dr. Lee says. “An investigational device is available in the United States only under an FDA-sanctioned or sponsored clinical trial. Currently, only ten centers around the country have access to these investigational devices under a clinical trial. Boca Raton Regional Hospital is one of those centers. It is the only hospital in the entire state of Florida that has access. The next nearest centers are in Alabama and in North Carolina.”

Dr. Dienst, 70, says he is “immensely grateful” for the care he has received from Dr. Lee and the other professionals at Boca Raton Regional Hospital. In addition to his TAAA repair, he has undergone a number of other procedures with Dr. Lee, including a groundbreaking surgery to repair his cardiac arch, the main artery that carries blood away from the heart. One of the most impactful procedures in regards to his quality of life, he says, restored blood flow to his left arm so he could continue playing the classical guitar after his second aortic dissection.

“I wasn’t getting much blood flow. I had problems walking. I wasn’t getting good blood flow to my spine. There was a period of time when I could hardly use my arm because it was blocked so extensively. So, I mean, it’s not just simply putting in a TAAA stent,” Dr. Dienst says.

The TAAA repair stands out, though, because the alternative would have been a difficult open surgery and long recovery.

“The option he offered me, I think, was the best that I could have found,” Dr. Dienst says. “It was a complicated procedure. The issue with that particular procedure is if it’s not done correctly and monitored properly, you can end up being paralyzed. You can have it knock off the kidneys, part of the bowel — all sorts of complications… I got up and walked out of the hospital. I mean, it’s remarkable.”

Dr. Lee, an affiliate clinical professor of surgery at Florida Atlantic University’s Charles E. Schmidt College of Medicine, cautions patients to be skeptical of surgeons who say they can repair TAAA endovascularly by adapting devices not designed or approved by the FDA for that purpose. The results can be disastrous. The custom-made devices he uses take approximately two months to manufacture with utmost quality control so that they fit precisely.Dr. Dienst agrees that it’s critical to seek out a highly trained and experienced surgeon. As a pulmonary medicine fellow in the 1980s, he trained with the world-renowned Michael DeBakey, M.D., considered a genius way ahead of his time. “I put Dr. Lee in that category, without question,” Dr. Dienst says. “He’s brilliant. He is. And also extremely well-trained. Technically, I haven’t seen anybody better.”|With the worst of the COVID-19 crisis over, Dr. Dienst has decided to retire from working at his small hospital, which struggled through the pandemic. He plans to spend more time with his wife and children, and relax after a long career of responding to the emergencies of others and saving lives. It’s a strange feeling, but he knows he’s fortunate to have the opportunity. “I haven’t actually figured out what I’m going to do with retirement,” he says. “I read, I play my music. I’m sort of, you know, thinking about things.”