When Gwen Watson was diagnosed with glioblastoma (GBM), an aggressive brain cancer, she and her husband didn’t hesitate to drive four and a half hours from their home in DeLand, Florida, to Baptist Health’s Miami Cancer Institute so that she could receive state-of-the art multi-disciplinary care and enroll in a clinical trial. “My family did a lot of research on where I could get the best treatment,” Ms. Watson said. “And Miami Cancer Institute was that place.”

(Watch now: Gwen Watson of DeLand, Florida, talks about why she chose Miami Cancer Institute for her treatment for glioblastoma. Video by George Carvalho.)

Ms. Watson’s cancer journey began in February when she suffered an unusual fall. Normally active and steady on her feet, the 63-year-old noticed she was bumping into things when she walked and having difficulty multitasking. The retired U.S. Navy nurse knew something was terribly wrong.

A trip to her hometown emergency room confirmed her suspicions. A mass in her brain turned out to be glioblastoma, the deadliest type of brain cancer. Approximately 15,000 Americans are diagnosed with glioblastoma each year. Symptoms can include headache, nausea, vomiting and/or drowsiness and seizures. Depending on the location and size of the tumor, other brain functions can be affected.

GBMs originate in the brain, meaning they have not spread to the brain from elsewhere in the body. Ms. Watson’s tumor was compact and encapsulated, and surgeons immediately removed the mass. Two days later she was home, surrounded by her blended family that includes her husband, Bob, their children and bonus children, and grandchildren.

“It was a whirlwind,” admitted Ms. Watson. “But I’m very blessed that I have such strong advocates in my life who care about me, did the research and found this clinical trial at Miami Cancer Institute.”

Because GBMs are so resistant to treatment and there is no cure, participation in clinical trials is recommended for patients, said radiation oncologist Rupesh Kotecha, M.D., chief of radiosurgery and director of the Central Nervous System Metastasis Program at Miami Cancer Institute. 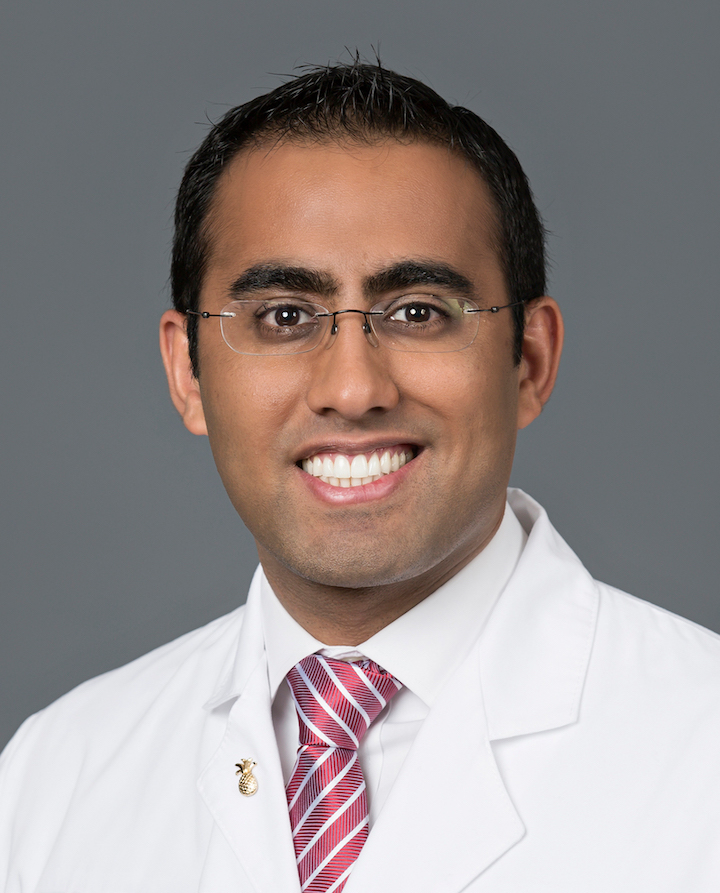 “The prognosis for glioblastoma patients in general is, unfortunately, poor,” Dr. Kotecha said. “Typically, 16 to 18 months, depending upon age and co-morbidities, the extent of surgery that can be performed, and if the patient has other treatment. We are learning more about glioblastoma and we need to offer patients more biology-directed treatments.”

Miami Cancer Institute offers an array of clinical trials for patients with brain or spine tumors, according to Dr. Kotecha. “These trials are either testing novel radiation therapy modalities, new drugs in the clinic or potential ways to make surgery better,” he said.

Ms. Watson entered a trial called “Dose-Escalated Photon IMRT or Proton Beam Radiation Therapy Versus Standard-Dose Radiation Therapy and Temozolomide in Treating Patients With Newly Diagnosed Glioblastoma.” The national study, under principal investigator Minesh Mehta, M.D., deputy director and chief of radiation oncology at Miami Cancer Institute, is comparing outcomes of patients who receive proton therapy (a more conformal form of radiation therapy) to those who receive traditional photon radiation (or X-ray therapy). The hope is that survival will be extended with the use of the more focused therapy, delivering a higher dose. Miami Cancer Institute opened the first proton therapy center in South Florida and is the most experienced center in the region. 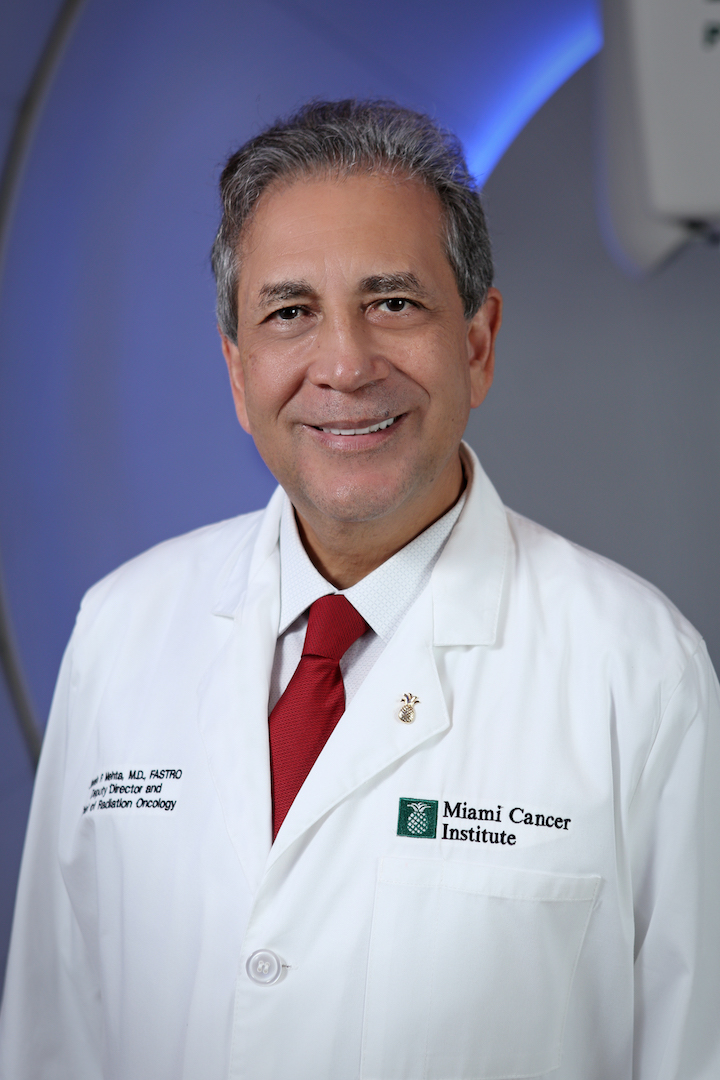 “The current trial is building upon the promise of our earlier trials that demonstrated a preliminary signal of survival advantage from dose-escalation, and the expectation of fewer side effects when using proton therapy, including better preservation of immune cells required to fight the tumor,” Dr. Mehta said. Baptist Health Cancer Care, comprised of Miami Cancer Institute and Lynn Cancer Institute at Boca Raton Regional Hospital, is the only healthcare organization in South Florida offering the trial.

Ms. Watson first met with Dr. Kotecha and the multi-disciplinary team at Miami Cancer Institute via telemedicine in March, following her surgery. In April, she began radiation therapy and chemotherapy at the Institute. For six weeks, she underwent daily radiation therapy, Monday through Friday. On weekends, she and her husband enjoyed time with their daughter, Candace, who lives in Miami, and their grandchildren.

In addition to the outstanding, caring and welcoming staff, Ms. Watson said that the ability to stay at the Hilton Miami Dadeland on the Baptist Hospital campus made receiving her daily radiation therapy easy. “It really was the best-case scenario,” she said. “We would walk over from the hotel and we’d also walk around the lake. It was an opportunity to get out and just enjoy the ducks, and nature and sunlight.” 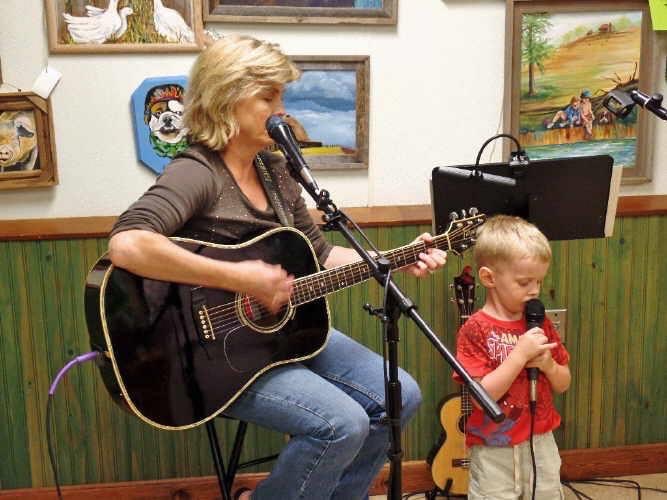 Gwen Watson performing while accompanied by her grandson

While Ms. Watson understands the gravity of her situation, as a musician and music therapist she is also focusing her energy on connecting with nursing home patients in palliative care. “I’m very aware that I have an intimate acquaintance now with mortality, but it’s not morbid,” she said. “It just incentivizes me to get busy to do what I can to make a difference.”

Ms. Watson’s faith and optimistic mind-set caught Dr. Kotecha’s attention. “This is a life-changing diagnosis,” he said. “What impressed me was her positive attitude, her demeanor and the entire family embracing her around the diagnosis.”

On May 24, Ms. Watson, surrounded by her medical team and family, rang the bell signifying the end of her radiation therapy treatment at Miami Cancer Institute. She returned home to DeLand and will have periodic telemedicine visits with Dr. Kotecha.

“My life changed in an instant,” Ms. Watson said. “But it’s not what we go through in life, it’s how we go through it. It’s real easy to miss the blessings if you’re not looking for them.” 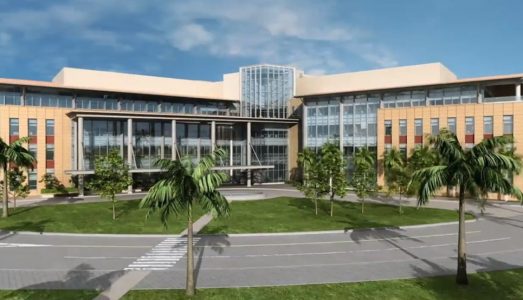 For others diagnosed with glioblastoma, Dr. Kotecha recommends finding a cancer center that is experienced in treating brain tumors and that, like Miami Cancer Institute, offers clinical trials and wraparound services that improve quality of life such as massage therapy, mindfulness and meditation, rehabilitation, nutrition services and more.