A team at Miami Cardiac & Vascular Institute is the first in the state, and the first in the Atlantic Southeast, to perform a so-called LIVE (Less Invasive Ventricular Enhancement), a minimally invasive procedure that “reshapes” the heart by reducing the size of the left ventricle (as illustrated above), allowing for a seriously ill patient to approach normal functionality

A 71-year-old man suffering from congestive heart failure successfully underwent LIVE as part of a nationwide trial that has been expedited by the U.S. Food and Drug Administration (FDA). Miami Cardiac & Vascular Institute is one of about 20 centers nationwide recruiting patients for the trial. The patient is doing well and has gone home following the two-hour procedure. Nationally, 17 LIVE procedures have been performed as part of the trial.

If it weren’t for the LIVE procedure, more accurately known as “left ventricular reduction,” the patient’s prognosis would have been poor. Alternatives for such patients with advanced heart failure is a heart transplant or LVAD (left ventricular assist device), a pump that is implanted inside a person’s chest to help a weakened heart pump blood. The Institute’s LIVE team was led by Ramon Quesada, M.D., medical director of Structural Heart and Complex Percutaneous Coronary Intervention, and Niberto Moreno, M.D., emeritus chief of cardiothoracic surgery.

Left ventricular reduction targets patients with a history of heart attacks that leave behind well-defined scar tissue, as was the case with the Institute’s patient, whose heart was pumping at less than a 20 percent ejection fraction (EF). An EF refers to the percentage of blood that is pumped out of the heart during each beat. A healthy heart has an EF between 50 to 75 percent. 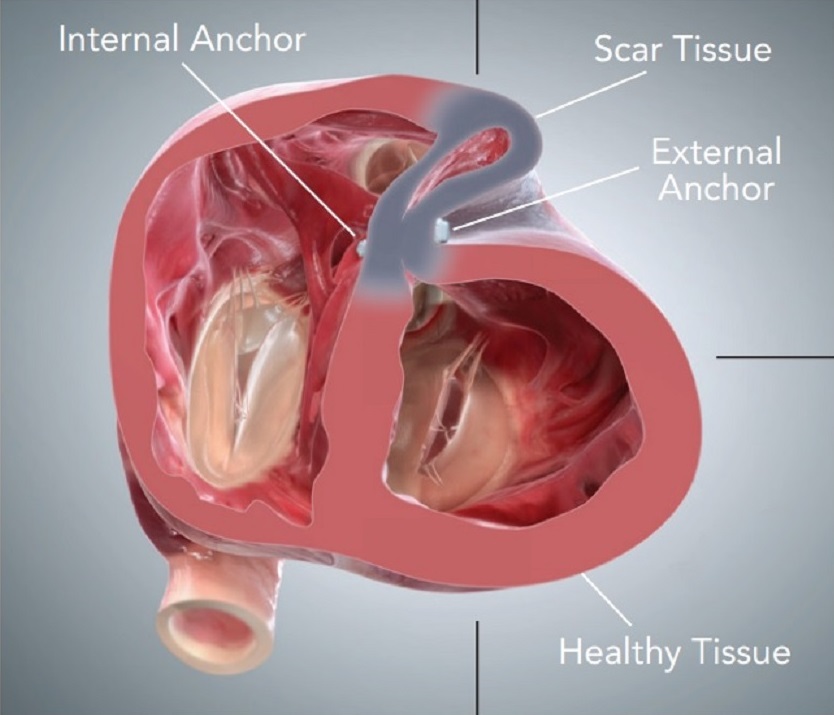 During the procedure, the patient’s left ventricle was reduced in size by more than one-third, resulting in an EF rate that jumped to 35 percent — and now improving, said Dr. Quesada.

“This procedure isolates the scar tissue area and basically creates a new and healthy left ventricular cavity that contracts normally,” explains Dr. Quesada. “The only way to do that in the past was by performing open-heart surgery, which can be really catastrophic. In our patient, we reduced the size of the left ventricle by 35 percent. The patient is doing very well. The results are really spectacular.”

The key to left ventricular reduction is to isolate scar tissue, resulting from a heart attack, so the healthy portion of the heart can function more efficiently, says Dr. Quesada. This system uses “micro-anchors” (see illustration) that are implanted and designed to “remodel (or reshape) the heart to a more normal shape and size and reduce wall stress,” states BioVentrix.

The Institute’s patient suffered from heart failure, which means that the heart isn’t pumping as well as it should be. The body depends on the heart’s pumping action to deliver oxygen- and nutrient-rich blood to the body’s cells. Shortness of breath, fatigue and weakness are common symptoms of heart failure.

The Institute is actively recruiting more patients for the left ventricular reduction procedure. Candidates must go through extensive screening. The trial is referred to as ALIVE, which stands for American Less Invasive Ventricular Enhancement.

“This procedure is a real game-changer,” says Dr. Quesada. “We now can give patients an option who would otherwise be condemned to chronic, congestive heart failure.”